A lot of informed fans reasoned that if NPFL TV generates N18 billion annually, it will guarantee each of the 20 clubs in the Professional League at least N500 million annually.

Joy like an overload envelope millions of football lovers in Nigeria and elsewhere as they watched or later read in the newspapers NFF President Amaju Pinnick declaration on Channels TV on January 2, 2021, that the Nigeria Professional Football League (NPFL) TV will generate N18 billion or more annually.

Said Pinnick then, “The NPFL TV has come to stay and we are very excited about it. We are projecting about N18 billion that we will be making from it every year. It is free-to-air at the moment but we are looking at a subscription fee of N1, 500. With that, you can sit in the comfort of your home and watch the NPFL games.

“It is going to have a huge impact on the economy because we are looking at an economy beyond oil, beyond other areas.

“Why can’t we do what they do abroad? We appeal to Nigerians to give us the support. Our traducers come and join us. Let us build this together.”

He added, “36,000 people in the UK subscribed to watching the league on their tabs.

“People should understand that we want to minimize mistakes and that is why it took this long for the league to start. We are growing the league to make it an integral part of our economy and we will make it better.”

But fourteen months after the sweet talk by Pinnick, the NPFL TV is yet to generate a Kobo and if the league television has generated more or less than the announced figure, Pinnick is yet to tell Nigerians.

Nigerians were overjoyed when Pinnick made the declaration because they have seen what television money has done for clubs in Europe, Asia, Latin America, some parts of Africa and the rest of the world.

They reasoned that if NPFL TV generates N18 billion annually, it will guarantee each of the 20 clubs in the Professional League at least N500 million annually.

With guaranteed income from television and other sources, clubs will be able to pay players and staff decent salaries as at when due.

Instead of travelling with night buses, they will fly, especially to places where it’s more than an hour or two by road.

They will be able to set up proper academies. Our young players will no longer be at the mercy of unscrupulous agents who enslave them.

Twenty financially independents clubs in the NPLF will have positive effects on the local economy, especially in the host city as they will create employment in industries like event management, stewards, hospitality and tourism, entertainment and others industries.

The biggest beneficiary will be the NPFL board as it will be financially strong to meet its obligations like payment of staff, referees and others.

But 14 months after Pinnick’s declaration, we are yet to see the impact of NPFL TV on the league. Neither Pinnick nor the Chairman of NPFL Shehu Dikko has told the world how much the league television has generated or whether the project has failed.

League still in a bad state

Clubs owners who spoke on the condition anonymity claimed they have not received a Naira from the LMC either in sponsorship or television rights money,

“We just read or hear about league sponsorship but most clubs in the NPFL don’t get a share of this sponsorship money unlike what happens in Europe or even North Africa or South Africa. We pray and hope that one day we will have a board that will share sponsorship money with clubs”

Financially the LMC and most of the clubs are in a bad state. Most of the clubs cannot meet their financial obligations to players, coaches and other categories of staff.

Kano Pillars recently informed that the club’s poor performances in the league are due to poor funding. The club secretariat has been paralyzed because PHCN has disconnected the power supply because of unpaid.

But not just Kano Pillars, most of the clubs are on life support except a few clubs like Remo Stars.

In terms of organization, the best days of the league are in the past. NPFL is probably the only league in the world that does not have a start date and an end date.

Matches start and end at the discretion of officials. Unruly behaviours at match venue are the order of the day. The NFF and the LMC just stand akimbo watching the league move from bad to worse.

Light at the end of the tunnel

In this state of hopelessness, some officials see light at the end of the tunnel. For Alloy Chukwuemeka a member of the LMC, the NFF President projection may not be a reality now but it will surely come to pass.

“ The vision will surely come to pass come” Chukwuemeka believes the N18 million figures being projected by the NFF President are not out of context if efforts by the LMC to ensure the NPFL TV dream see the light of the day is anything to go by.

“I can assure you the NPFL TV is the brainchild of LMC and you will agree with me that the country will surely reap in a lot far bigger what is being projected considering the marketing value in terms of advert and sponsorship.

“We are working hard to make that happen, and that explained why we had to test run the TV platform last season. It will surely come to stay when everything is finalized," he told 234sportsng.com in a telephone chat on Wednesday.

In his words, journalist, Sab Osuji the terrain is not completely set to welcome such international vision, adding that it could take some time for NPFL TV to begin its full operations in Nigeria.

“I think the NFL TV is a different company that would want to take their time to study the terrain first. They will have to recruit here and come up with their equipment. It can happen but I certainly think the terrain is not just set yet," he told 234sportsng.com.

Ironically, while the LMC and the Nigerian football clubs are struggling to set up a profitable television channel and enjoy the immense benefits that come with it most football clubs in the Maghreb regions of Egypt, Morocco, Tunisia, and Algeria, are making money from TV right.

With funding from television and other sponsors, they have more than enough to run their clubs, pay players lucrative wages, buy good players, pay handsome transfer fees and upgrading of its facilities. It is the TV rights that these clubs earn unheard-of riches.

Nigeria must study the North African model and adopt it. We need clubs that will be run as a private entity like it’s done elsewhere not a premier league that most of the club sides are government-owned are run by civil servants.

Pinnick putting the cart before the horse

Pinnick and LMC must also realize that they need to put many things in place before our league could be attractive to fans and investors.

First, they have to create a brand most corporate bodies would like to identify with. There has to be good and playable pitches at all venues and not the ground we have today that is good for growing millets and potatoes though some pitches are in a good state.

Security is also a huge problem at the match venue. This will continue to dissuade fans from coming to watch matches. NPFL cause is not helped by the greed of officials and poor organization that pervades the league.

Instead of putting the cart before the horse Pinnick and LMC must do the basic first before dreaming of an NPFL TV that will generate imaginary N18 billion in revenue annually?

Rather than making fake promises, Pinnick should start thinking of legacy projects because the last seven years of his leadership of Nigeria football can rightly be called the years of the locust, ironically time is not on his side.

Middlesbrough vs. Chelsea FA Cup: Mikel gets special role with Lineker and Shearer

Novak needed more than two hours to win a match which featured some magnificent...

Elaine Thompson-Herah was in top form after she emerged champions at 2022 Puerto...

Tuchel has dropped Kepa Arrizabalaga despite his impressive form

Aribo gave the Gers a stunning second-half lead after capitalising on Tuta's unfortunate... 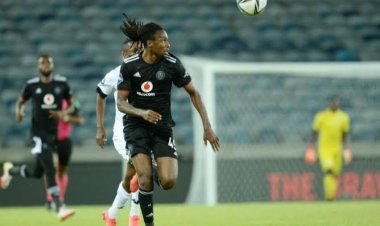