England legend Alan Shearer has named the Everton duo of  Alex Iwobi and James Tarkowski in his Team of the Week for their performance against West Ham.

The Toffees beat the London outfit by a 1-0 scoreline on Sunday in the Premier League and looked rock solid at the back.

Speaking to the official Premier League website, Shearer said, “James Tarkowski – A tower of strength at the back for Everton.

“Alex Iwobi – Much-improved performance and set up the winning goal.”

Iwobi in midfield is like a new signing for the Toffees this summer and Frank Lampard deserves all the credit in the world for it.

Despite all the midfielders that have signed, it cannot be denied that he’s been the pick of the bunch this season.

His work-rate has been exemplary and he’s been so good at playing the ball out of tight spaces and playing those delicate passes in the final third.

Also, Squawka, a sports data company as described the Super Eagles playmaker as the midfield inspiration in Lampard’s team.

On Sunday, the 26-year-old Nigerian combined well with Amadou Onana and Idrissa Gueye to offer Lampard the perfect blend of qualities in the heart of his midfield: tenacity, penetration, athleticism and verticality, able to retain possession and hog the ball, but drive at West Ham’s pedestrian double-pivot when the moment took them.

The eventual goal came through Neal Maupay, but Iwobi was the catalyst, collecting the ball in the middle of the park, before spraying it wide, penetrating the half space to collect, and then teeing up his French counterpart, who duly dispatched to break the deadlock.

That pass to Maupay means Iwobi has now assisted three of Everton’s last four goals in all competitions, underlining his emergence as a real creative force for the Toffees since his transition to midfield. But, it wasn’t just the assist. Iwobi was everywhere at Goodison Park.

The former Arsenal man finished the game with the most final third entries of any Everton player (13), the most shots (two), the most touches (74), chances created (two), as well as more than double the amount of final third passes of any of his team-mates (34), most take-on (four) and possessions won in the final third (two). It was a complete performance.

34 passes in the final third

As a reward for his hard work, Iwobi will soon get a pay rise.

The ex-Arsenal star is now 26, and the Liverpool Echo states that Everton is hoping to tie him down for the coming years.

His contract runs out in 2024, but Everton wants to avoid losing him for a cut-price fee this coming summer.

They are hoping a salary raise and a long deal will convince him to stay.

Lampard has been credited with getting the best out of Iwobi.

Pogba ‘under police protection’ in Italy

Man United is World’s most wasteful, Club in Europe

AMUSAN: Again, Johnson insists he is not a racist

Olympic champion Johnson learning to walk and talk after...

But in 2018, doctors feared he may never walk again after he suffered a stroke that...

Juventus board resigns over financial irregularities

Prosecutors in Turin are investigating the possibility that Juve presented false... 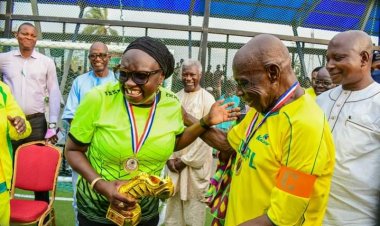 The former Nigeria President could pass as the oldest non-professional football...

There had been growing fears that they would be blacklisted in the style of Russia...

Over 30 Kenyan athletes have been reprimanded by the Athletes Integrity Unit (AIU)...

Addo has claimed the much-maligned forward had sacrificed himself for his team-mates...

Djokovic is the big favourite for Australian Open 2023...

One player who could be well-rested and especially fired up in Melbourne is Nick...